Hello again vampires! As we lead into the long, lonely nights at the end of the autumnal season and delve into winter, we hope you’ll take a little time from your evening hunt to enjoy another V Rising Dev Blog.

Tonight we’re going to share a little bit of the 3D modeling process and the people behind it, but before that, here’s a little update on the opening stages of our beta journey.

Before moving into the “Official Closed Beta”, we need to test our tech and ensure the servers hold up for the incoming vampire hordes. We’re calling this stage our “Preliminary Beta Test” and it’s set to start in early December with a fairly limited amount of invites. The information we gather here will go a long way to preparing us for future, larger tests, which you might have the opportunity to attend during Q1 and Q2 next year. There’s never a guarantee to receive a closed beta invite but fret not, creatures of the night. There will be plenty of invites sent before the winter is out!

From Heroes to Hordes

Some of you may be familiar with our previous title, Battlerite, which focused on developing a tight roster of unique characters. On the other hand, V Rising switches to modular character creation and an ever-expanding variety of enemies. This change requires a significant switch-up in the content pipeline for the art team. For this blog, we delve a little bit into one of the many hard-working developers and their place in this process, putting in the leg work to get V Rising into your pointy claws.

Andreas Eriksson is a 3D Artist at Stunlock Studios that’s been working with us since the days of Battlerite and is an essential part of our art team. Many of the creeps and creatures you might have admired in our screenshots and trailers have passed through his hands. One of the more popular ones includes the beloved, feared, and undateable (please stop asking) Behemoth! 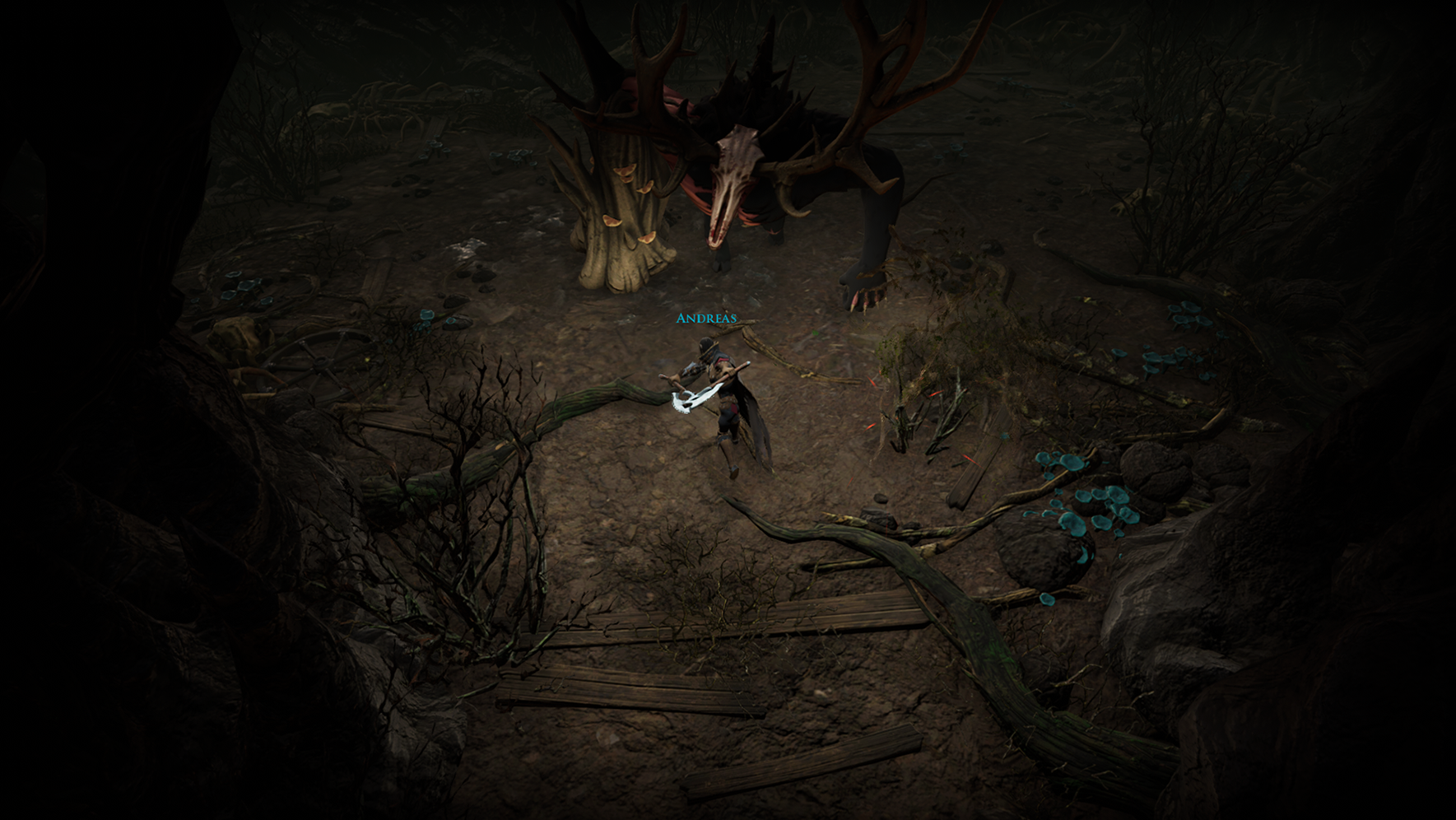 We sat down with Andreas to talk about his place in the process, which is taking the concept art he gets from our 2D artists and translating it into 3D models. We hope you enjoy this exploration of the process and get a better understanding of everything that goes into bringing the mortifying monsters, brutal bandits, and perilous paladins of V Rising to life.

From Concept to 3D

We’re going to be looking at one of Andreas’ favorite models as an example of how the process is handled: The Undead General. You may remember this handsome figment of regal rot from his cameos tossing deadly spike-tipped chains in the trailers or some of the concept art we’ve posted on social media. 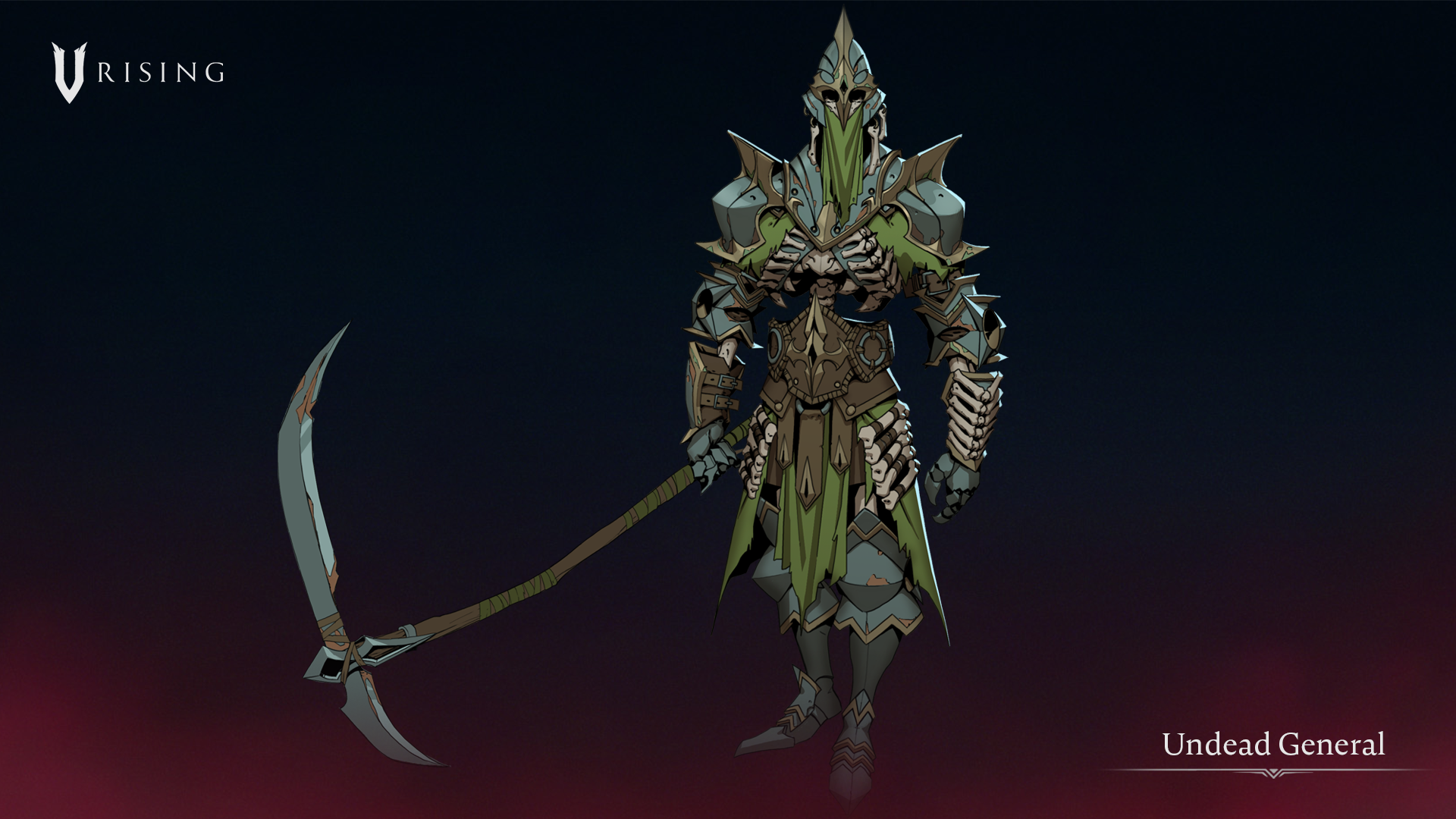 The Undead General in all his unholy radiance.

The first step is naturally for the 2D department to hand off this concept art to the 3D department, where the team will decide how they want to tackle the project technically. They now have to make decisions about the rig, which is essentially a skeleton of joints used to control the model in animation. The team figures out whether they need a new rig or can speed up the process by adapting one of our existing ones for this particular concept. In the case of the Undead General, his form was similar enough to an already existing rig that they were able to use. This handy little shortcut is pretty standard practice, and the 2D team will often consider this when designing the concept to save time and effort later down the line.

When the 3D team has a solid idea of the rig they’ll be using, it’s time to move on to sculpting and modeling the unit’s basic shapes.

“I start off by blocking out every shape of the model,” Andreas tells us. “Basically, I keep everything in a very low resolution so that I can easily iterate and focus on getting the right proportions before getting into the details.” 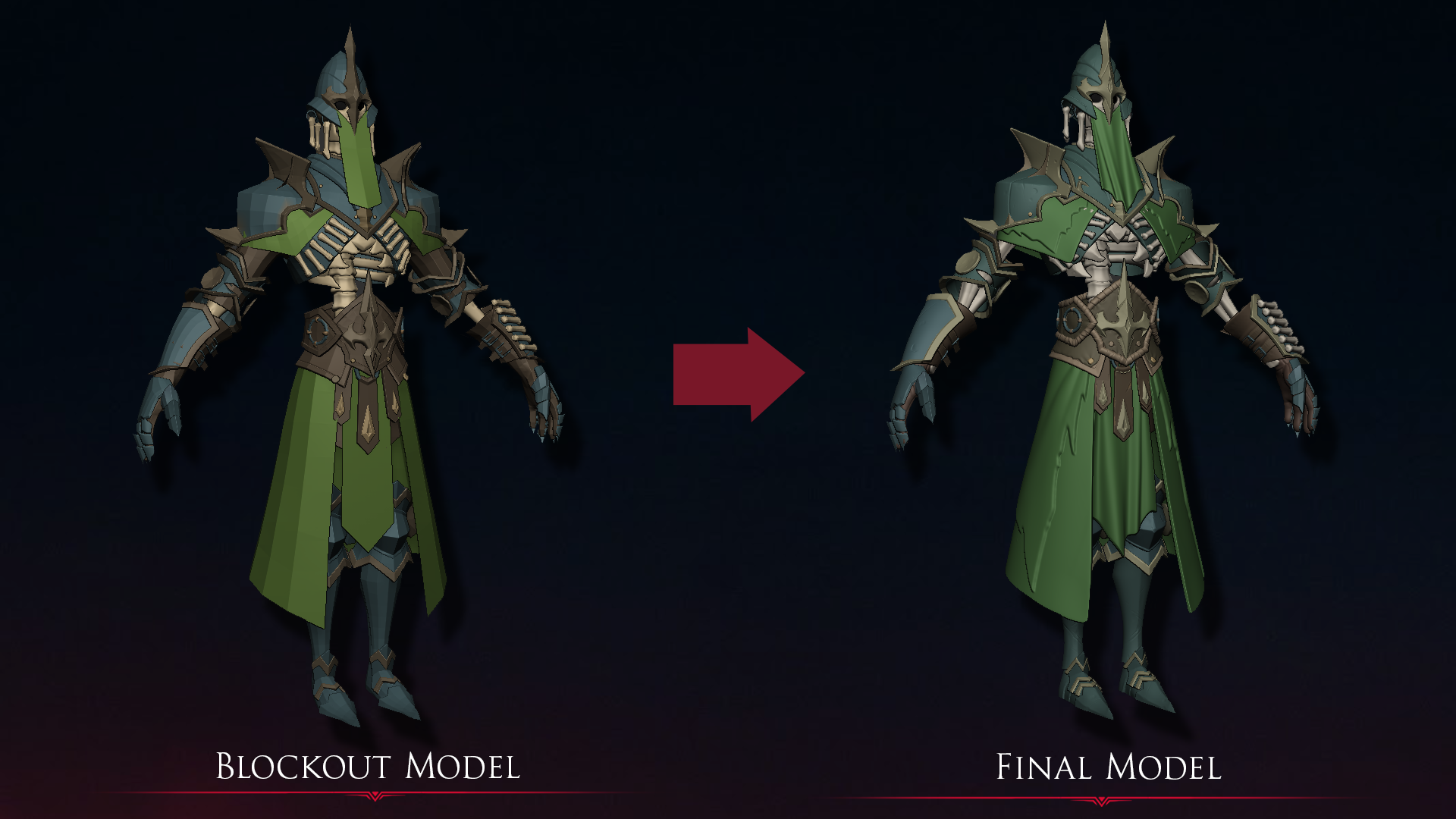 Now is where we start to get a little bit more technical! When we’ve got the general shape and details of the model ironed out, it’s time to move on to what is called ‘retopology’. To put it in simple terms, this is where the artist rearranges the surface of the model. The first step of this process is to create a low resolution or ‘low poly’ version of the character so that the high resolution sculpt from earlier in the process can be projected onto it. By doing it this way, he’s optimizing the object for later methods like animation. 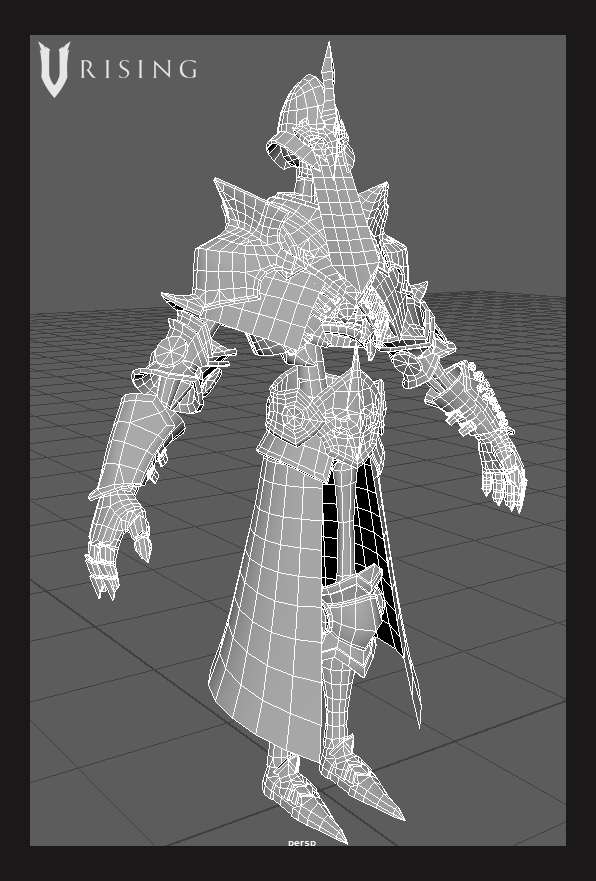 To project the high-quality model onto the low-resolution mesh, Andreas needs to create something called a ‘UV Map.’ Basically, to map each individual piece of the high-quality model to the low-quality model, he needs to cut the more complex model into components that can be arranged and assigned to each separate part of the base. That can be a bit to comprehend all at once, but our 3D artist was nice enough to break it down into simpler terms for us to understand.

“Imagine cutting up an orange and folding it flat.” –  Andreas

Once everything is set up and ready to be combined, they execute the projection and combine the two objects in a process they call ‘baking.’ 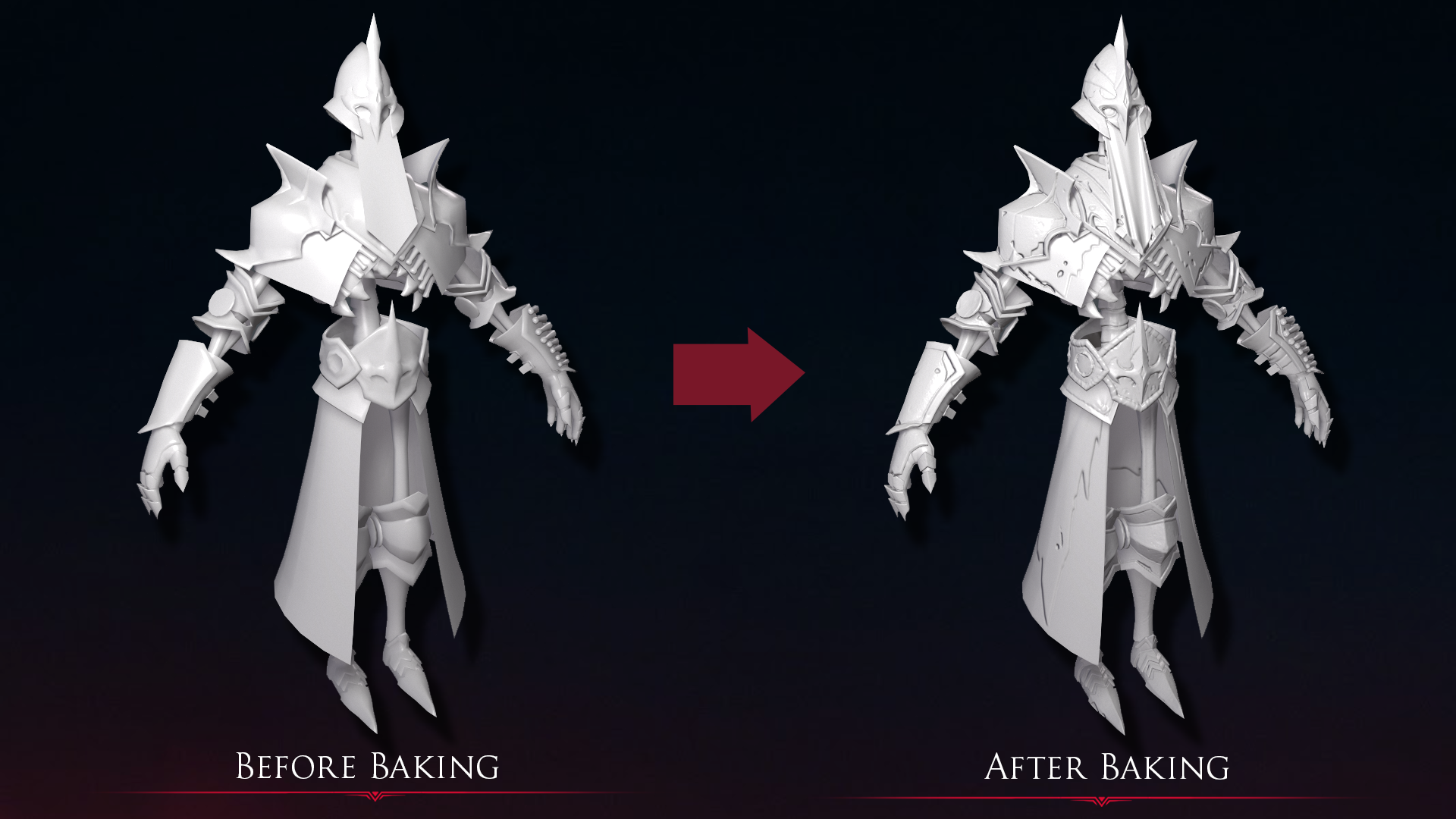 These are the same models. The left one is before projecting the high-resolution details, and the right one is after.

The last part of the process for the 3D team is to finalize the texture maps that will be used in-game. This involves adding color and texture to the object so that the lighting systems in the game know how to behave when they interact with the surface of the model.

Compared to some of our earlier projects like Battlerite where we went for a more painterly art direction, V Rising has a more traditional workflow that uses Physically Based Rendering or ‘PBR’, the goal of which is to attempt to simulate materials realistically. The biggest difference in this is how light is represented on the model.

“What it does is catch the light as if it would in real geometry,” Andreas explains. “Most of the light information is calculated by the engine, compared to Battlerite, where it would be painted onto the model or ‘diffuse map.’”

If you’re like me and having trouble wrapping your head around all of this map jargon, the 3D team was friendly enough to do what they do best and create a visual representation of all these maps and how they combine to create a final model. 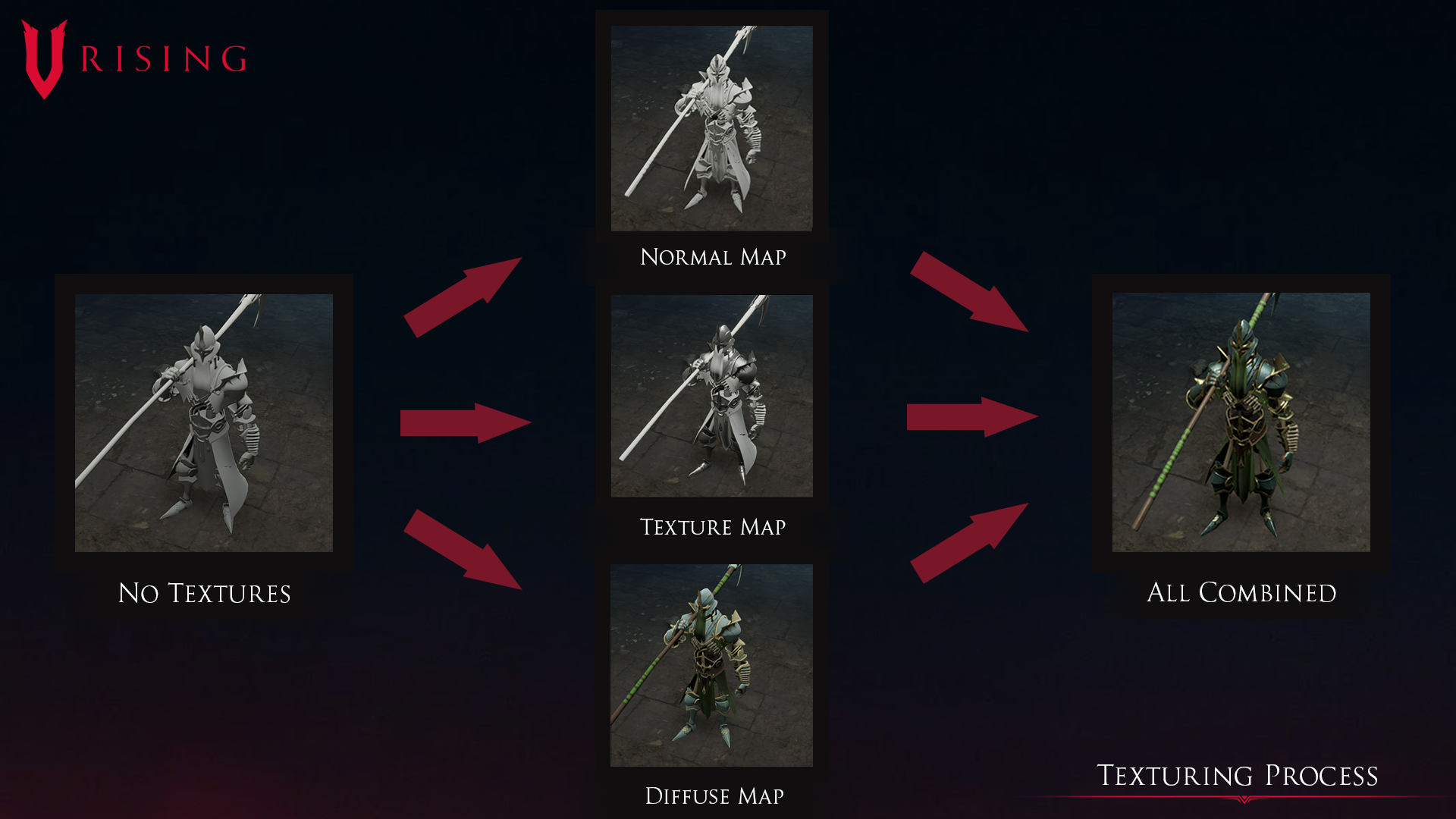 Rip It and Ship It!

All cleaned up and ready to go, it’s at this point Andreas is done with his work on this model and has to let go. Artists really don’t like to part with their work, but after we finish the hostage negotiations and pry the model out of his deceptively strong grip, we ship it over to the animators so that they can start working their magic.

Then, naturally, it’s on to the next one.

Looking to the New Year

We hope you enjoyed a little look into the day-to-day workflow of our 3D artists! While they continue chipping away at their polygons, meshes, and texture maps, the rest of the studio is marching on with them to continue developing the game and get us ever closer to the Early Access release next year.

Our next step will be to focus on the preliminary beta in December, take everything we learn from it, and apply it to development and future upcoming tests. Because of that, we’ll be taking a step back from blogging, but look forward to hearing from us again at the beginning of the new year with another deep dive into back-end development. Let us know if there’s anything, in particular, you’re excited to hear about!

Of course, just because there won’t be a Dev Blog in December doesn’t mean we’re going to go quiet; you’ll still see plenty of us on all our social media platforms in the meantime, so be sure you’re following us there for additional updates and news.