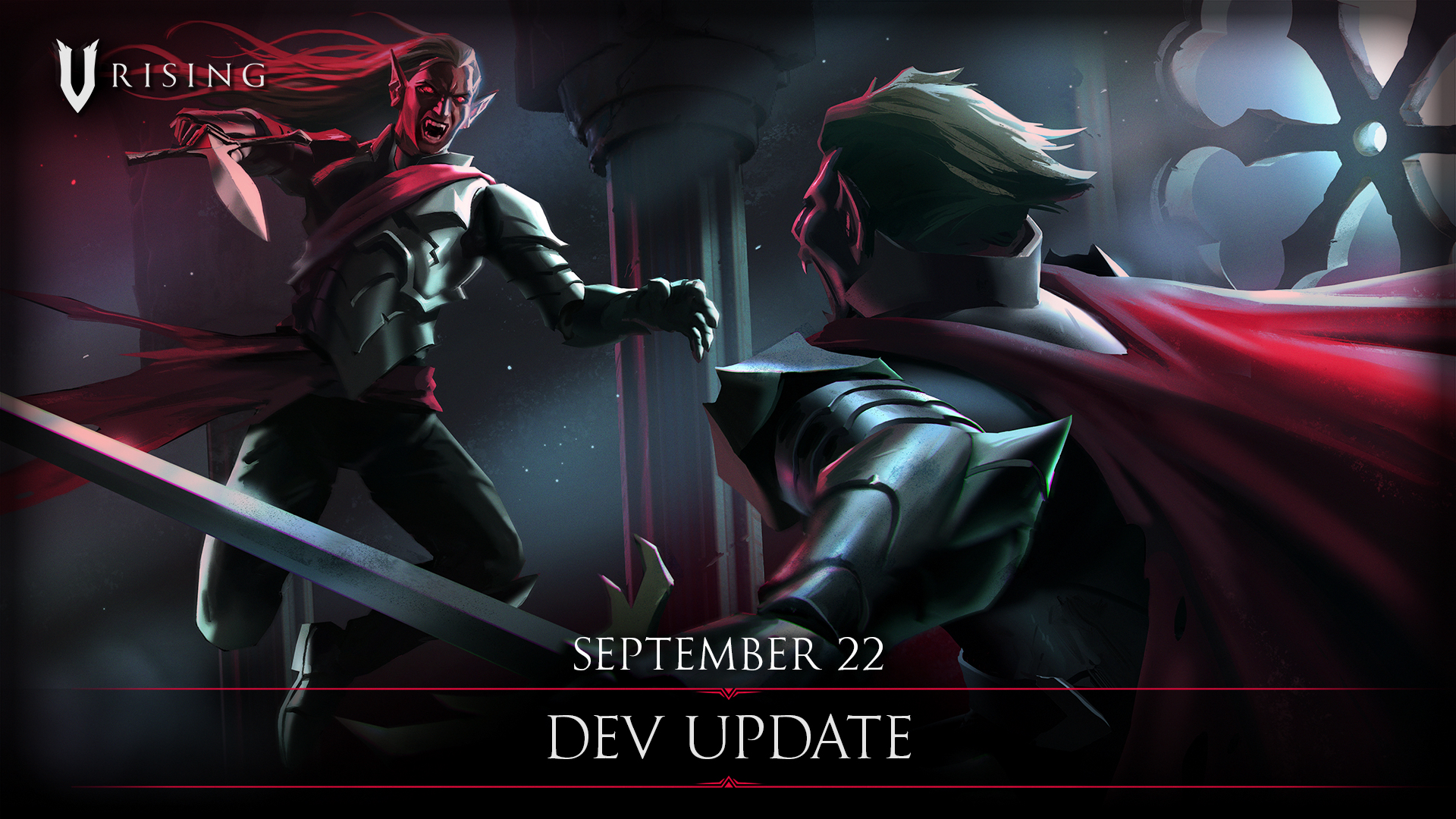 Hello to all you vampires and unwitting prey alike, and welcome to another dev update!

In the wake of the gameplay trailer, we figured everyone might be hungry for some more information on the experience of playing V Rising. For that, we consulted two of our most experienced designers, Creative Director Martin Lövgren and Game Director Peter Ilves! Expect to walk away from this update with a better understanding of what it will be like when players finally get to boot the game up for themselves.

Like in many survival games, players find themselves waking up in a hostile world with little to their name but the clothes on their back. However, unlike in those games, you’re the predator. Though we can certainly make do with tooth and claw, the hunger for a greater hunt will inevitably drive vampires towards greater prey than the skeletons and ghouls of the starting crypt. That will require the most powerful weapons, the sturdiest protection, and a place to keep all that well-earned loot. For that, we need to start crafting.

So if it’s so essential to progress, how exactly does crafting work in V Rising? To get started, players will need to discover recipes and gather the necessary materials to make use of them. Outside of the very basic starting recipes, you’ll need to recover forgotten knowledge from the bloodlines of the land, pillage them from NPCs and players alike, or even learn it through cooperation with allies!

One thing we’ve been very actively considering during development are the pain points we’ve felt in the survival games we’ve enjoyed. How can we make a more pleasant and seamless experience for our players when it comes to crafting in relation to their allies? Often when joining a survival game, there’s a disparity between the new player and their more experienced friends. There’s a period of “catch up” time where they’re trying to progress so they can experience the game with the people they joined to play with. For that reason, we’ve made it possible for your allies to learn recipes you’ve already researched through your crafting stations, allowing them to quickly get to a point where they can join in on the hunt! 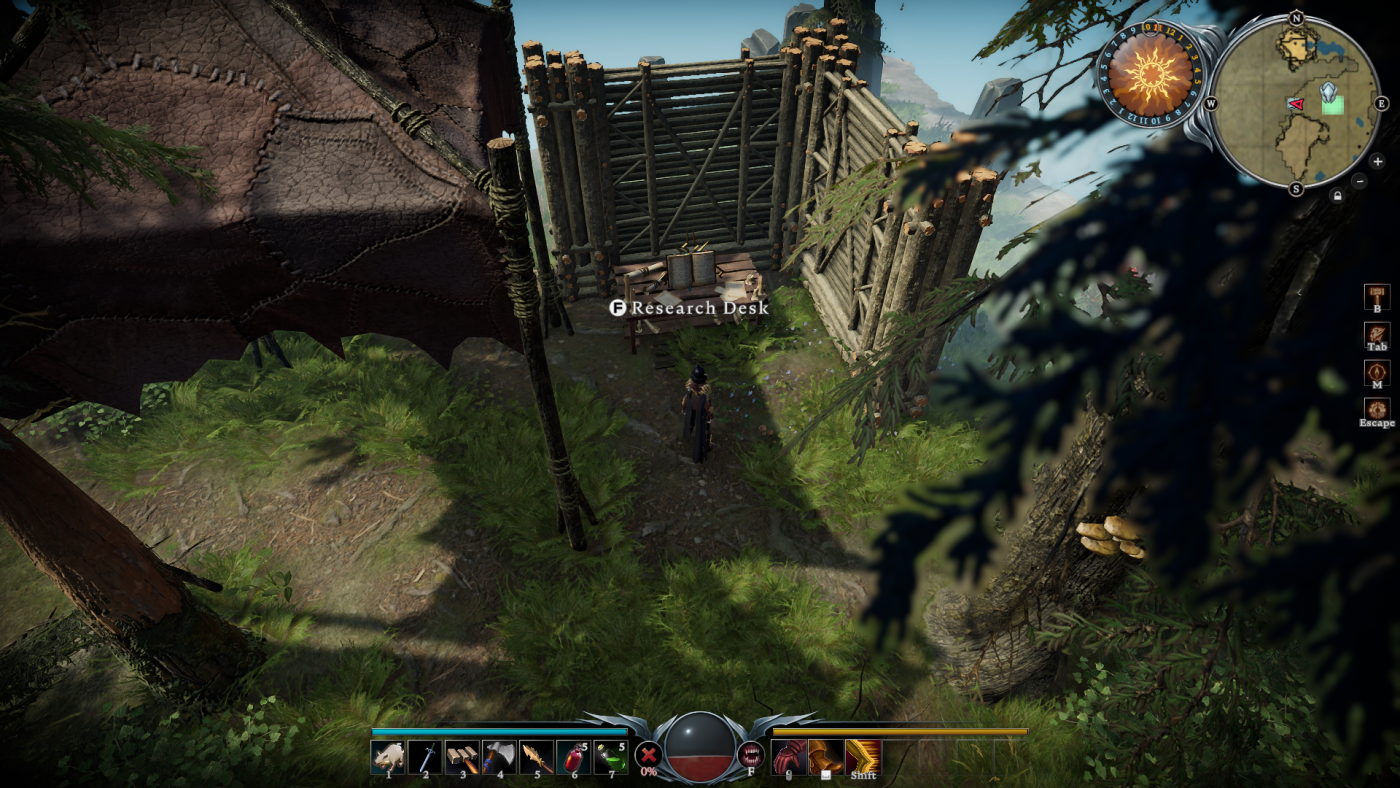 Here is where the castle comes in. They are the foundation of a vampire’s progression and the base of their power. Castles can be raised almost anywhere in the world, barring unique points of interest. In these vampire strongholds, you keep crafting stations, supplies, and your precious spawn point: the coffin. A home safe from the daylight, where nightcrawlers can work and rest between their excursions to hunt rare blood types, gather materials, or lead expeditions to loot other players’ territories.

The vision for castles is for them to be grand estates that represent your journey. As such, they’ll be relatively small as players start out, but we hope to incentivize you to continue to build on those castles and expand it into something grand enough to reflect that progress as you grow in power. There may even come a point where an experienced vampire might feel the need to have multiple strongholds scattered across the world to suit their expanding needs and those of their kin.

The world of V Rising is a persistent and lasting one, and we expect players to spend a good deal of time bringing their vampiric dreams to fruition and achieve not only the goals that we set out but the goals you set for yourselves. For that reason, we picture the world of V Rising as a lasting one that will remain active for long periods. It has been a fun and exciting challenge for us to build an open world, one that we believe requires a consistently interesting and exciting experience to maintain over time.

So what does it look like to play V Rising? From minute to minute, hour to hour, day to day, what will players be doing to spend that time in a way that’s fun and meaningful and that delivers on the vampire experience?

Our goal is to create a rich world, filled with wonders to engage. Enemies will come in forms as simple as villagers who can barely defend themselves to boss monsters powerful enough to push the limits of your capabilities. Some resources can’t be mined and will need to be pillaged from NPC enemy factions or the corpses of beasts and horrors. Some skills and abilities will need to be hunted down and discovered. 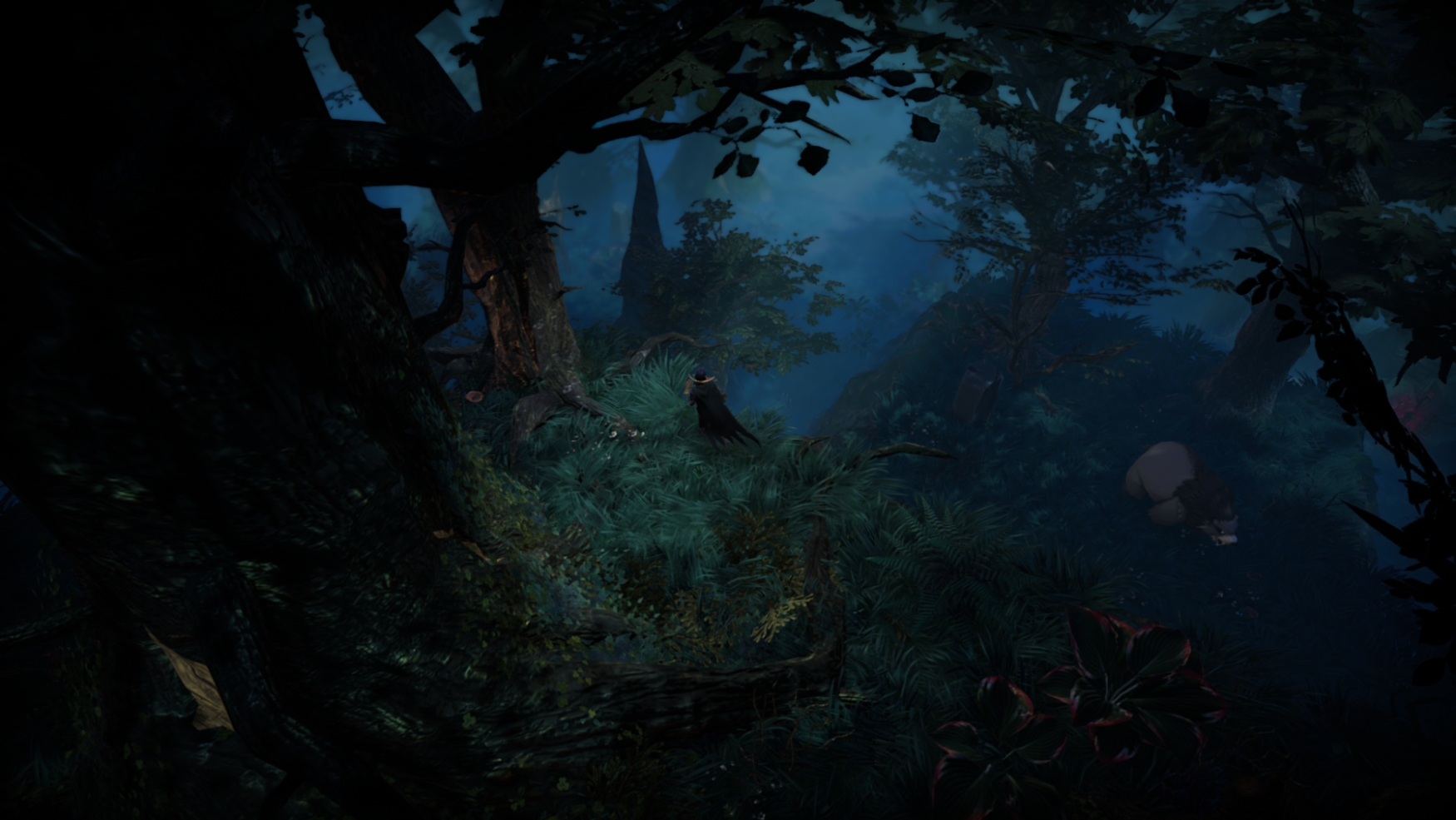 A vampire exploring the Cursed Forest.

The intention, of course, is to make these enemy encounters out in the world interesting! Depending on their level of intended difficulty, foes will have a variety of different abilities and attack patterns that players will have to adapt to if they want to survive. Here’s where our combat comes in, allowing players to really flex their claws and fight back with their unique move set and fluid movement abilities. Many of you who know some of our older titles like Battlerite might find yourself in somewhat familiar territory here. You’ll find some significant similarities in the way the combat feels with its smooth and precise WASD movement, skills, and skill shots making up the bulk of your combat strategy.

Not only do we want these sorts of encounters to be fun to engage with, but we want players to feel motivated to seek out every level of play and be rewarded for it. From hunting down rare monsters or facing down challenging bosses to cooling down by feeding on easier prey, building, or gathering resources, we want every level of play to feel rewarding in its own right. In solo play, this creates variety, allowing players to play the game without constantly feeling pressure to pump the accelerator at every waking moment. In team play, this can allow players who prefer to engage with certain aspects of the game to focus on those while enabling one another to engage with the things they like the most. Some people love feeling useful by keeping the castle supplied with essential resources. Some people like diving straight into a bandit camp and clearing the whole thing out but aren’t as excited about the upkeep. In this way, everyone can feel like they’re contributing in their own right. 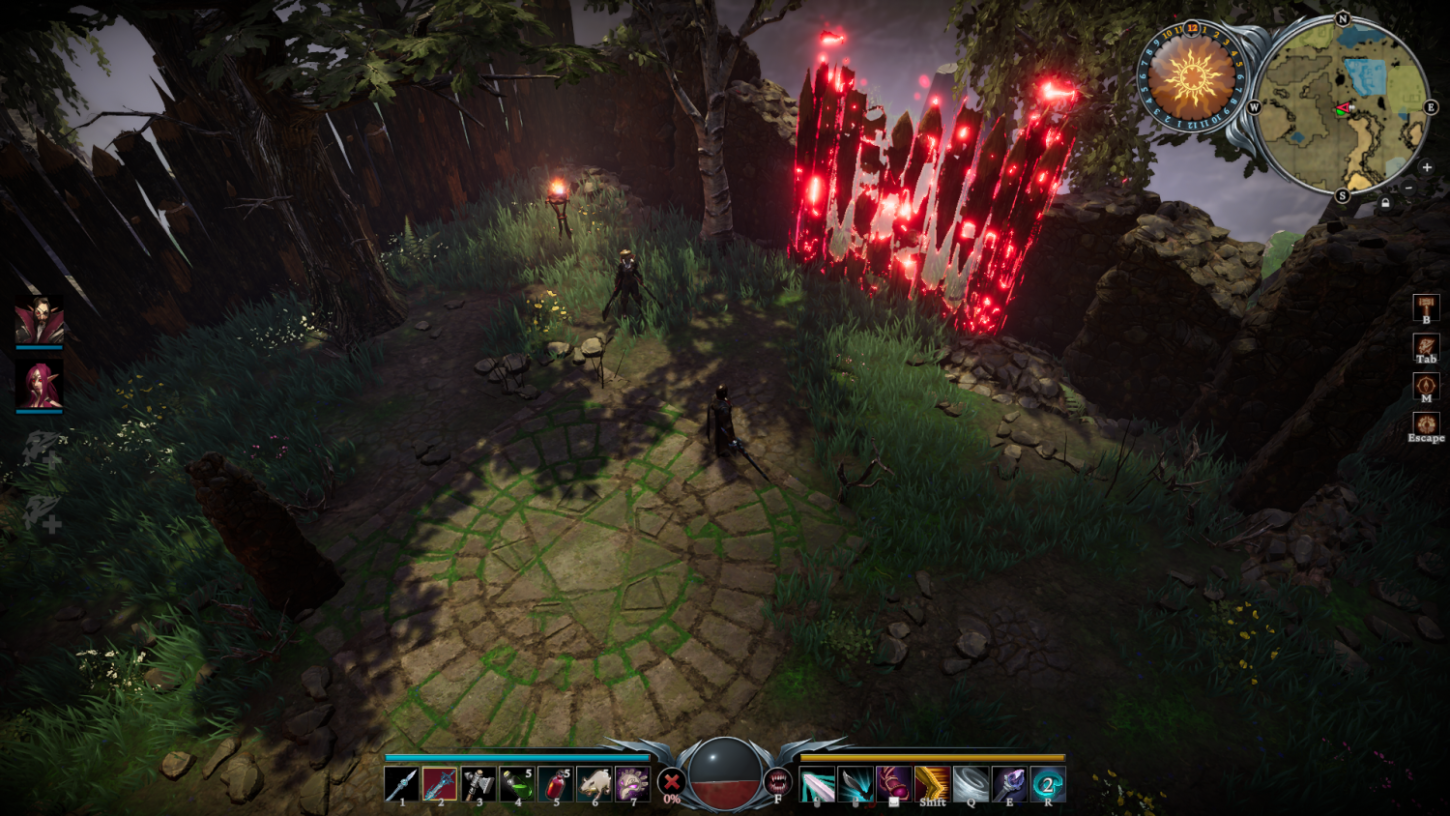 V Rising is both a power fantasy and a journey with a final destination. Our goal is to let you create private servers for your solo or co-op adventures. While playing on public servers, you’ll likely end up running into players you didn’t wholly intend to, which adds an interesting layer of gameplay. The world is full of creatures and points of interest, and these places might serve as a draw where it’s more likely to meet other vampires. Choose to cooperate with them and share the spoils of a kill on a rare or powerful monster, or maybe they haven’t been back to their castle in a while, and their inventory is full of valuable resources for you to plunder. This might motivate you to take advantage of their distraction for an easy player kill instead. These should be dynamic interactions of excitement and tension and could even lead to moments of bargaining or diplomacy.

Rise: Blood is Everything

Vampire society is an engine that runs on blood, and in the world of V Rising, that is perhaps more true than in many other vampire-themed games. Blood isn’t just what the undead drink to sustain themselves, but like veins running through a body, blood pumps through every aspect of what makes an unholy empire run. As one might expect, blood is obtained from the living beings that inhabit V Rising, and to get that blood, players will have to strike out into the world and take it. In this game, you’re a predator. The focus on harvesting prey to advance your abilities is essential to living that fantasy, and you’ll find yourself cutting through endless enemies as you claw your way to the top.

Everything needs to feed to survive, and letting your blood stores fall too low will cause ill effects and eventually lead to death if allowed to go too long without refilling those reserves. More than that, though, is that there are different qualities to the blood you’re harvesting. In an earlier dev blog, we mentioned that players could drink different kinds of blood for other benefits, and that’s still true! One of our current designs has buffs ranging from increased physical damage to magic damage to even improvements to resource gathering. More than that, individual humans have higher or lower qualities of blood. So hypothetically, you can have two of the same unit, but one’s blood provides a significantly more powerful buff than the other. 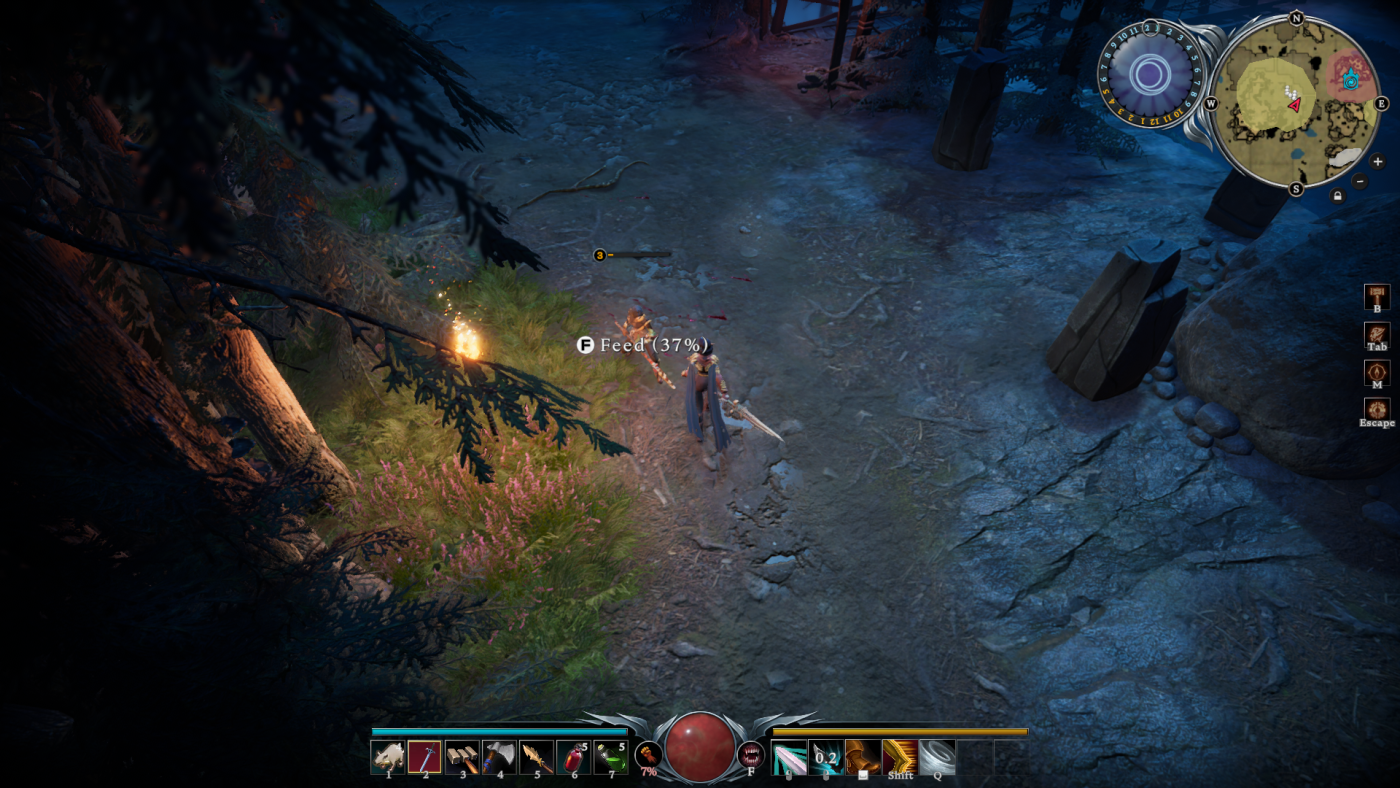 Blood will also help develop abilities that you acquire out in the world. V Rising is not a game with levels, classes, or races like one might expect in an RPG format. Vampires are powerful creatures who grow stronger over time. Variety exists in the form of abilities that can be permanently unlocked, combined with the more temporary abilities afforded by gear. These permanent abilities are more in line with your vampire nature and need to be developed to their full potential. It should be relatively easy to acquire enough of these skills and abilities for a player to fill out their skill bar and be able to stand toe-to-toe with other vampires or enemies in the world. However, if you want the specific variety that appeals to you most, you’ll have to do some hunting to acquire them.

When I said blood fuels everything, I meant it. A vampire’s castle is built on a foundation of blood magic, and the most recent design of the castle has what we’re calling a “Blood Well”: the living, beating heart of your territory. The Blood Well acts as a point to feed blood into, reinforcing the castle structure and preventing it from falling into disrepair. While the Blood Well is adequately fed and maintained, your crafting stations will not only operate more effectively, but the castle defenses will be significantly more challenging to assail from the outside. Its walls will be more difficult to harm and even regenerate their structure at a rate that makes it impossible to break in with claws or simple weapons alone. As long as you maintain the Blood Well, breaking in will be nearly impossible without an impressive coordinated effort and significant dedicated resources. 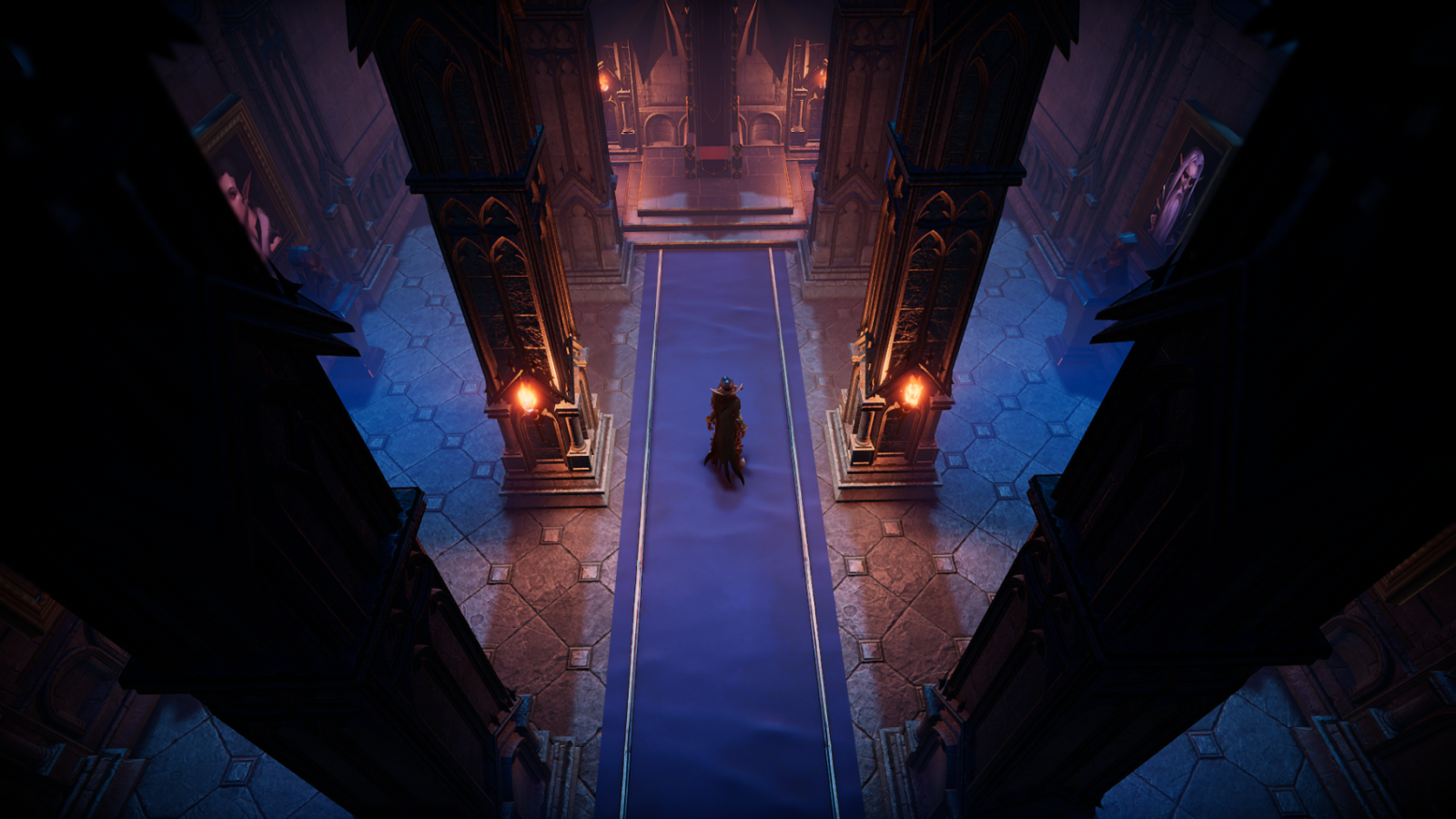 While your castle can be assaulted, by default, we don’t intend for it to be outright taken or particularly easy to tear down in its entirety (though we would like to include it as a possible server setting option.) This is part of what will make it necessary to constantly feed the Blood Well, something that will grow more difficult to do as you expand the size of your castle and harder still with multiple locations. Not feeding it will lead to lower protection and possibly even slide into decay. On public servers, this will make it so players won’t be able to keep taking up valuable real estate on a server if they’ve moved on to another server or simply stopped playing for a very extended period.

This is just The Beginning

We hope you’ve enjoyed this deeper dive into the world and mechanics of V Rising, and maybe you’ve got a little bit better idea of how the game will feel to play when you can finally get your hands on it. We’re all really looking forward to it and can’t wait to bring you more news about the closed beta later this year!

For more information on that, be sure to sign up for the beta and follow us on our social media down below!