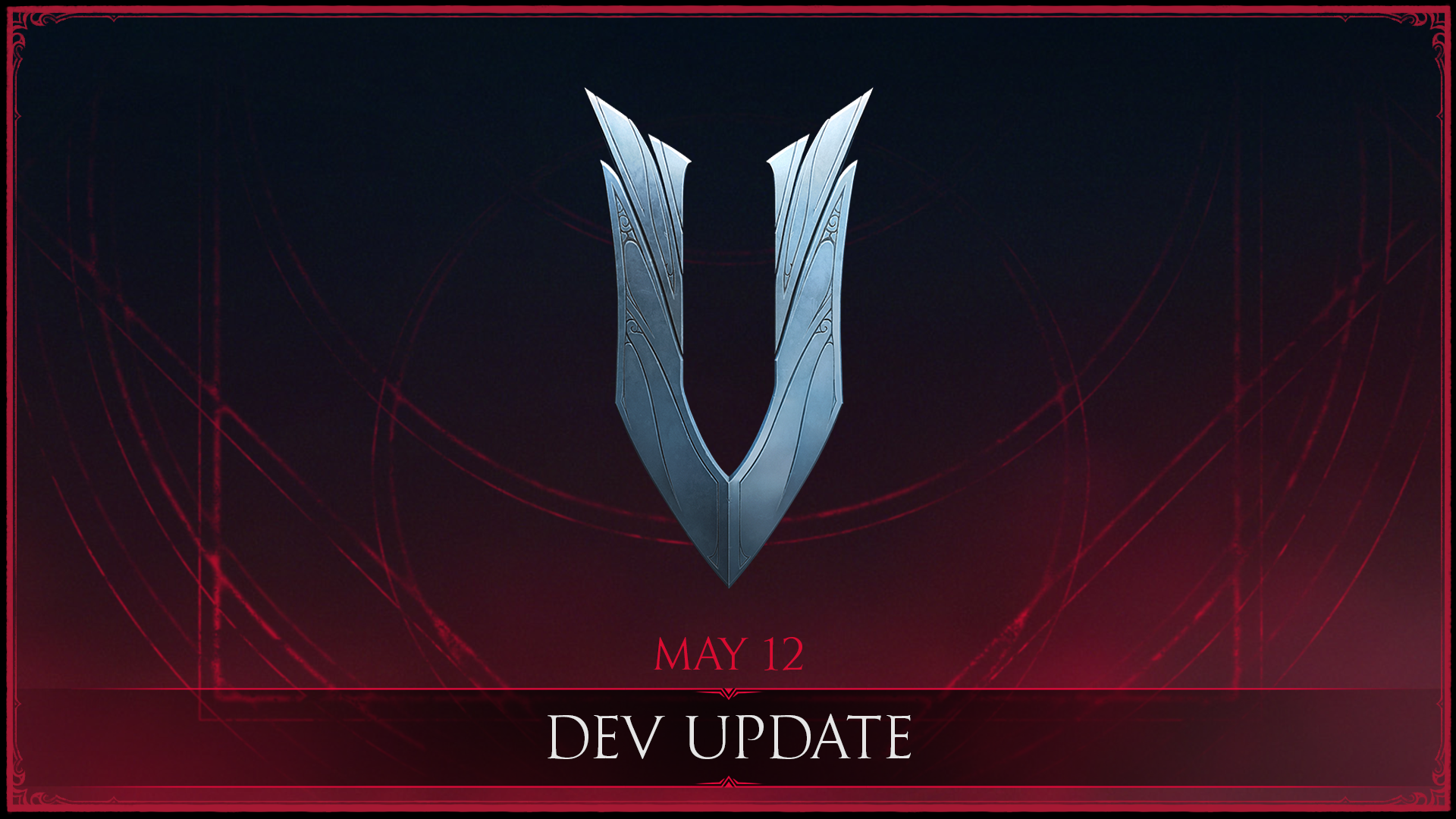 First off, we would like to shout out and thank everyone who has played and shown interest in our games. We’re happy to see all you arena brawlers online, still killing it. Looking back, Battlerite was an underdog on the MOBA scene, going up against giants in the game industry, and you guys made it possible for us to make some serious noise on an extremely competitive scene. More than 6 million users have played our games since the launch in 2016, which is truly amazing, and we cannot thank you enough for the support.

This dev blog focuses more on our upcoming game, V Rising, and less on Battlerite. Many have been asking for an update on our new project, and today we are revealing more information. Let’s begin by briefly going through what led us to develop V Rising. Our studio has been non-stop creating and working on arena games of different types for ten years straight, from Bloodline Champions and Dead Island Epidemic to Battlerite and Battlerite Royale. We felt it was time for us to step into the unknown and create something different. By exploring new genres in our research and design sessions, we found one idea that stood out among the rest and sparked our inspiration: A vampire fantasy where players fight for power while trying to survive in a dark world full of conflict. Our vision gave birth to V Rising, a name shortened from Vampire Rising.

What is V Rising?

V Rising is a vampire survival game for the PC, played out in a gothic open-world, containing a mix of exploration, building, crafting, and action-packed combat. Rise from your coffin as a newly-awakened vampire, stripped from your former powers, fight for survival and strive to dominate the land of the living. Play solo or create a clan with up to three friends as you build your castle, hunt for blood in nearby villages, and wage war against your enemies. The world of V Rising is inhabited by both NPCs and players, offering PvP and PvE challenges. You will need to power up your character by obtaining unholy abilities, crafting armor and weapons. You will also need to strengthen your castle while the threat from other players is rising.

Is this game related to Battlerite, or is it an entirely new game?

V Rising will be a new franchise set in a never-seen-before universe, unrelated to Battlerite. That said, V Rising’s fighting is inspired by Battlerite’s skill-based combat, where aiming and dodging skills with WASD input is crucial for victory.

So… is the combat the same as in Battlerite?

V Rising and Battlerite’s combat is more like apples and pears. Craft weapons and learn an array of spell kits with unique traits (much like Battlerite Champion abilities). Tailor your playstyle by combining weapons and spell kits to your liking. We’re introducing a weapon switch, similar to the one many players enjoyed in Dead Island Epidemic (for you who can recall that!), plus various items players can use to their advantage. You also want to make sure to drink the right type of blood before heading into battle. Strategy plays a more significant role, as the environment and PvE threats will impact combat. Imagine that you are fighting another player in the forest when, suddenly the sun rises, forcing you to continue your battle in the shadows. The fight is super close as you hit a tree with a well-aimed spell, it falls, and the already hurt opponent is now exposed to the sun. The burning sunlight kills your enemy, and you start looting their body when a hungry grizzly bear enters the frame.

Is this a top-down perspective game and how does the camera work?

V Rising uses a top-down camera similar to our previous games but with some modifications. In the current design, the camera is slightly tilted and you can rotate the camera angle 360°. This gives the player more camera freedom and a better perspective when navigating the open-world environment. 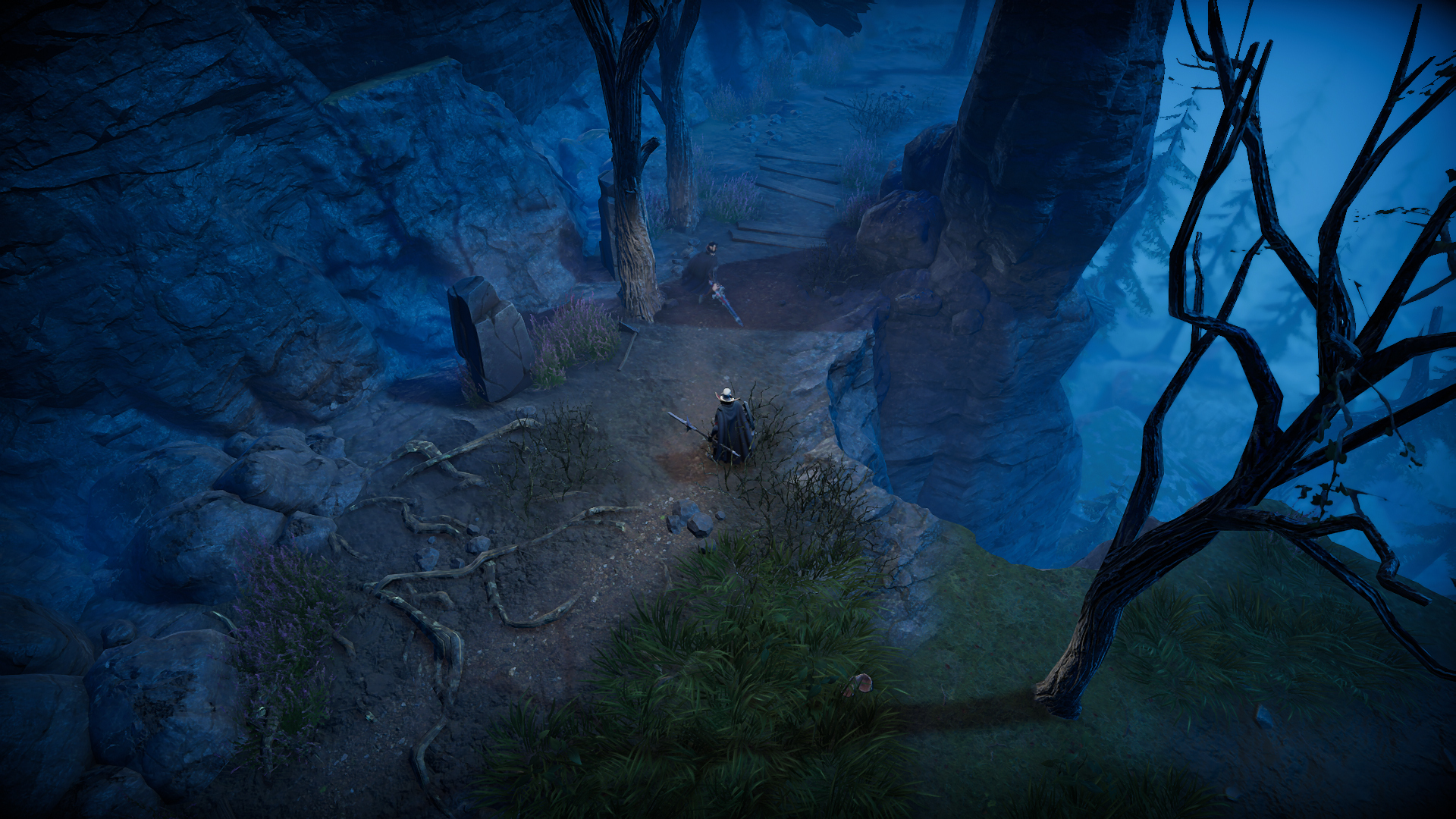 How does blood work?

As you all probably already know, vampires need blood to survive. Attack humans to drink their blood or finish them with a bite. Additionally, there will be different blood types, each with its own perks. To give you some quick examples: fresh “warrior” blood improves your physical damage, “rogue” blood improves movement speed, and “scholar” blood improves your magic damage. Certain blood gives advantages in combat situations, while “worker” blood would be the safe bet if you’re out gathering resources.

There will be castle ruins from the time vampires ruled the world for you to claim and rebuild. Your castle works as your clan base, where you stack your loot, craft items, and keep your army of vampire servants. And yes! You will be able to build your castle piece by piece, putting up walls and doors, constructing workstations, amongst others. Express your vampiric style by personalizing your domain’s appearance with an extensive selection of decorations. You will also need to build additional houses for workstations and create walls to protect your belongings from other players. We will reveal more about castle building and blood’s function in later updates, so stay tuned.

We’re currently working on this feature, and there might be changes down the road. In the current design, you hunt down and convert human warriors, archers, and mages to grow your army of darkness. They will protect your domain and stand ready to do their new master’s bidding. Servants will also give you an extra pair of hands on your crafting stations. Every servant will need its coffin.

How does the day and night cycle work?

Daytime has a significant impact on the gameplay, as exposure to direct sunlight will harm you. Later in the game, you will learn how to craft gear and items(not sunscreen!) to improve your sun resistance. Humans won’t spot you as easily in the dark, which gives you advantages when hunting at night.  There will also be particular beasts who only roam the world after dusk and other specific events connected to the night and day cycle. 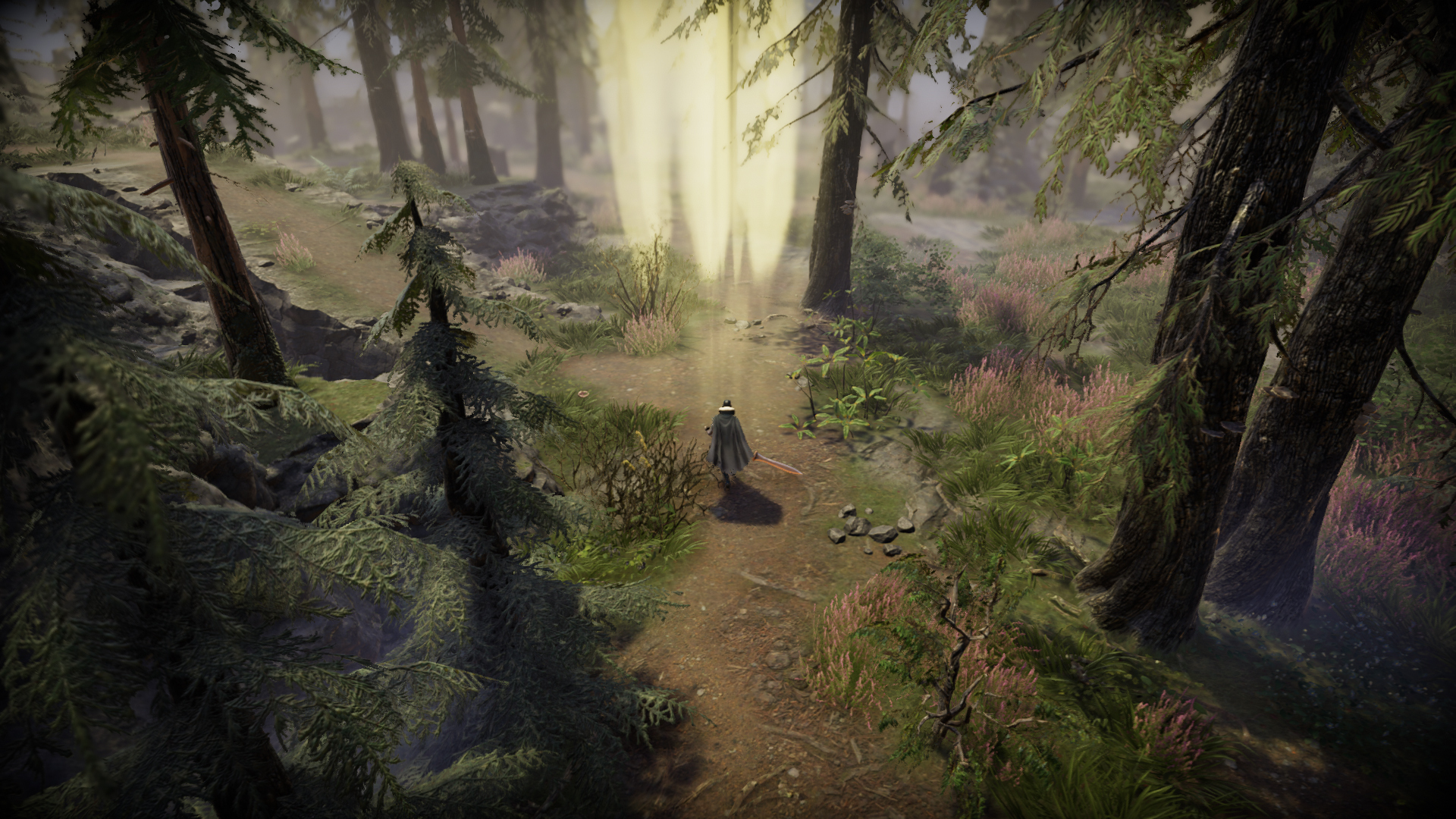 Don’t forget that you’re a vampire! Stay in the shadows.

Is V Rising a competitive game?

Not in the same sense Battlerite is, but skills matter in both PvP and PvE. We’re taking advantage of our experience in creating battle arenas to develop our take on an open-world survival game. Our inspiration comes from various Action RPGs and Survival games while staying true to our studio’s core strengths. One of our vision statements is to make genre-defying games, and V Rising is no exception.

How many players will be playing at the same time?

We haven’t decided on the exact number, but there will be room for at least 50 castles per server. Remember, there can only be one “Dracula”.

How will servers work? Do I need to play with friends?

Our vision is that players will be able to host private servers, with the possibility to choose to play solo and co-op in a less competitive environment or to go full war mode in PvP. We are also looking into having support for public servers hosted by trusted partners.

Are there loading screens when moving between areas in the world?

Except for the start zone, V Rising offers a seamless world where you can move freely between regions and different areas. We recommend traveling on horseback.

Is there a way to win?

You can think of V Rising as a king of the hill with survival elements, where you rise to become the supreme vampire ruler. When you are the kingdom’s most powerful vampire you must fight invaders to keep your claim of the throne and stay on the top of the food chain. Fighting side by side with friends will give you an advantage in your battle against the strongest creatures and other players trying to dethrone you.

And more importantly, will there be werewolves in the game?

Can I create my own vampire?

Yes, you can create and customize your vampire before you enter the world of V Rising.

When will the game be released?

There is no set release date at this time. V Rising is a big scoop that will require both a closed beta followed by an Early Access before our vision for the game is complete. We’re planning to start the closed beta later this year. You can register here: https://playvrising.com/signup

Will V Rising be free-to-play?

V Rising is a premium PC game, and we currently don’t have any plans on releasing it with a free-to-play model. The Early Access pricing will be announced closer to the release of the game.

When can we see gameplay?

Hopefully, during late summer! The game is currently in pre-alpha and still needs some more love before we start recording video footage. However, we will give you guys treats in the meantime, so make sure to follow our social media channels. 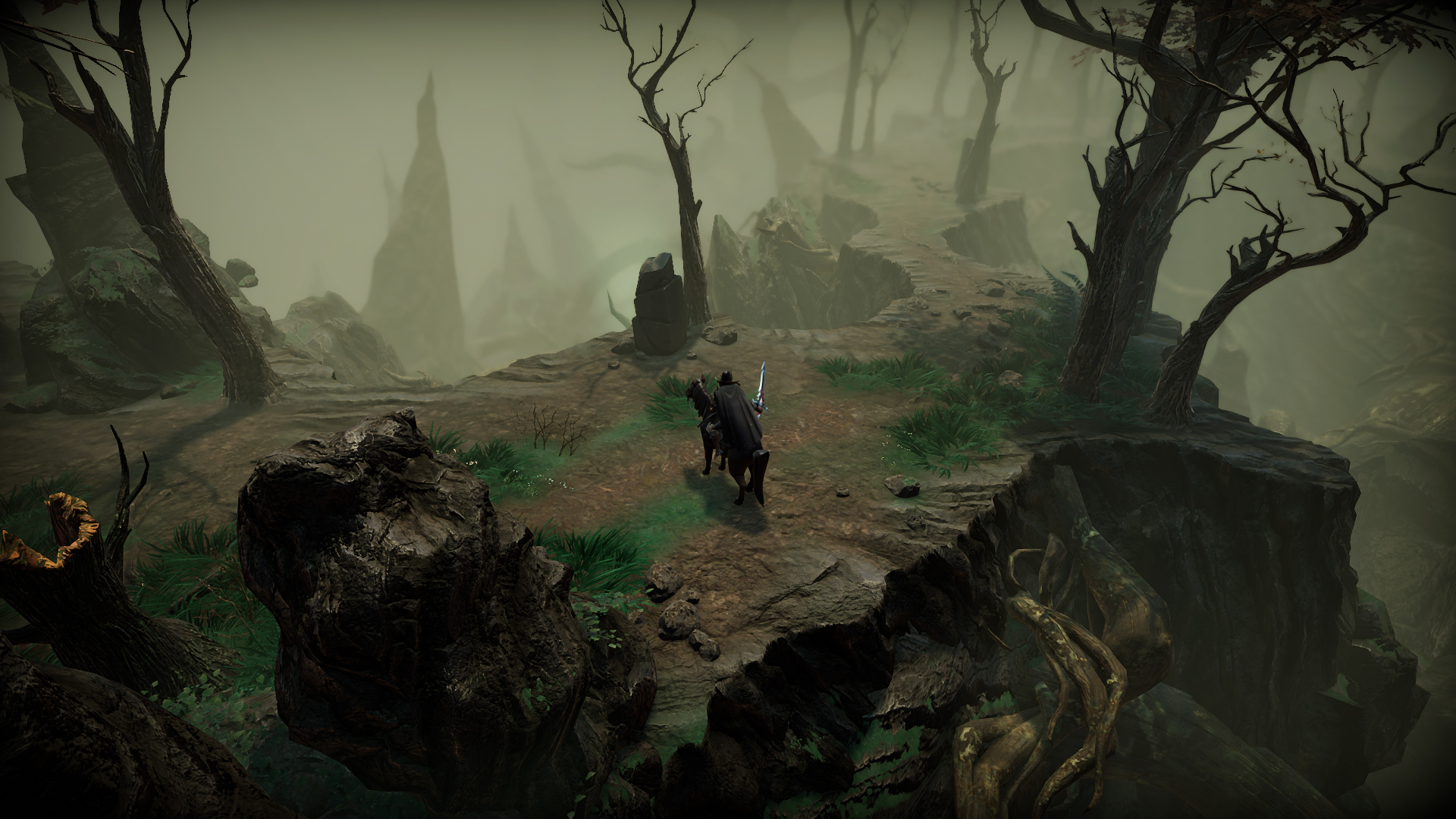 Sneak-peek of the cursed forest.

Will V Rising be available in other languages besides English?

Yes. We will add more languages later during development, with the goal of having multiple languages supported when launching V Rising on Early Access.

I am a Streamer/Youtuber and want to create V Rising videos. Can I get access to keys or other exclusive content?

We are creating a program for content creators/influencers who want to join. You can apply by sending us an email to info@playvrising.com. Please include your channel(s)’ URL(s) and a short description of your content and community.

How often can we expect dev updates?

We’re still working on nailing the fundamental features and mechanics of V Rising; thus, we can’t promise how often we will be revealing information about specific parts of the game. We will, however, do our best to keep you updated during development, posting a good mix of content reveals and dev updates.

How can I support the game?

V Rising is our most ambitious game yet, and we’re as excited as humbled. We greatly value your support during the beta and need your most inspiring ideas to create the best vampire survival experience possible. You know our games better than anyone, and your opinions will be crucial for us. Please wishlist the game on Steam and join our brand new “V Rising” Discord server to share your thoughts, get exclusive sneak-peaks, and hang with our developers.

That’s all for now, folks. It’s still too early to go into all the juicy details, but we’ll keep you updated and kindly invite you to get involved in the development while moving forward. Make sure to convert your friends to vampires, stay tuned for more exciting V Rising news, and thanks for your continued support.

Much love and a pint of blood! 🦇