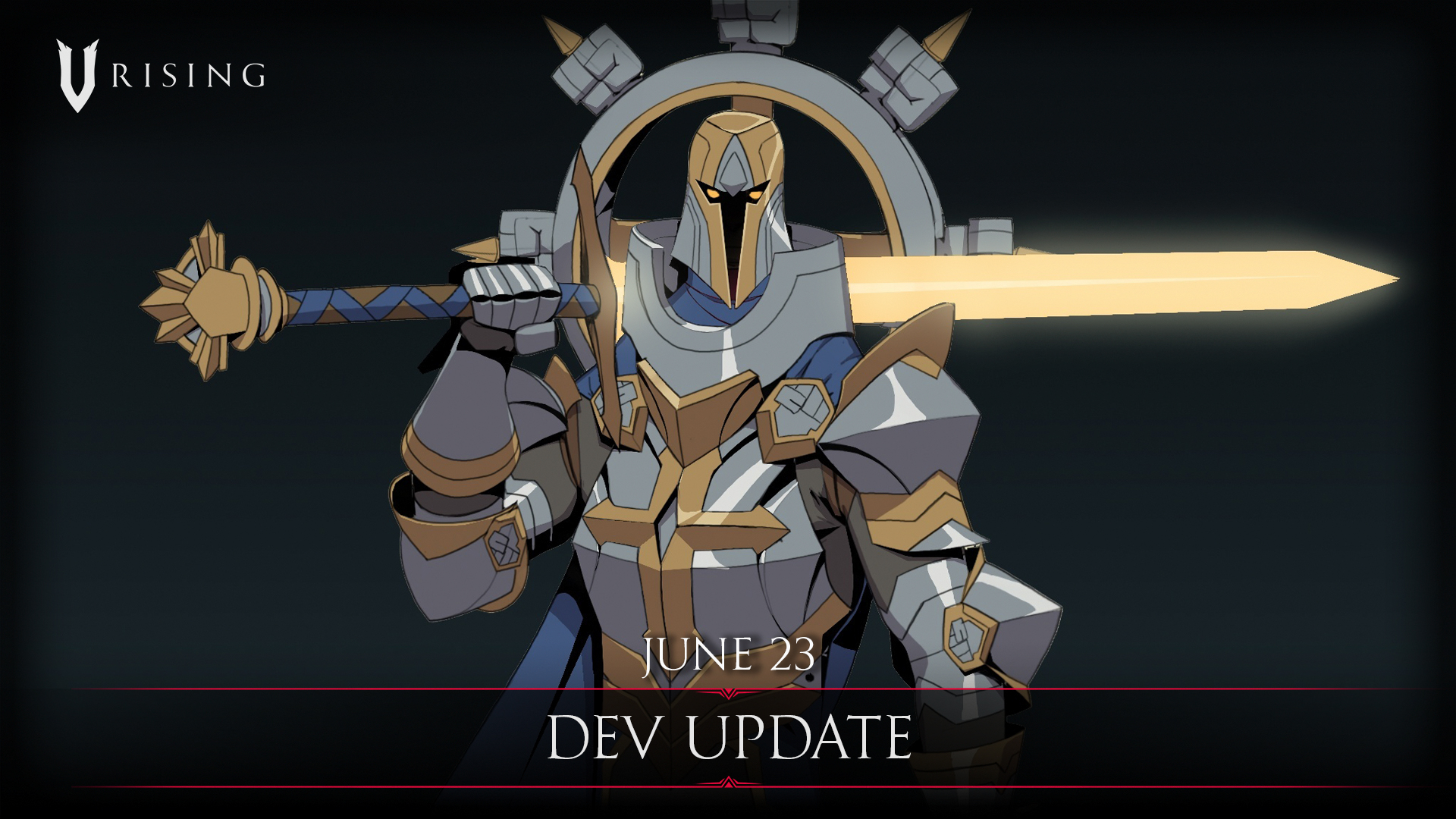 In this dev update, our new Community Manager, Jeremy Bearson, talks to our Art Director Johan Wahlbäck to find out the nitty-gritty details about the art direction and mood of V Rising. Let’s dive into it!

There are many Johans at Stunlock Studios; say hello to the Art-Director-Johan. What can you tell us about the general art direction and mood of V Rising?

Hello everyone! Johan is quite a common name among 80s-born guys in Sweden, and, interestingly, there are three Johans working on the branding together. As most of you already figured out, V Rising is a dark and atmospheric vampire-themed game viewed from a top-down perspective. Compared to our previous titles, we put more effort into communicating a comprehensive range of emotions through art and sound. We want you to forget the real world for a few moments and get immersed in our universe by using plenty of atmospheric layers, art, sound, and music that wander between melancholy, darkness, and beauty. The world of V Rising is a harsh place with a long history of war, and for our graphics, we chose to use realistic textures while the stylization is more playful.

Early concept of a castle furnace.

Some folks in the community wonder if creating a world with higher fidelity and more details will hurt the readability. How do you deal with that?

Johan W: Even though readability isn’t as crucial as in a competitive arena game like Battlerite, we still work a lot with this in V Rising to make the player feel they are in control of the various gameplay situations. Since the world is high in detail, we chose to simplify the shapes of our characters to make them read better. We’re using an approach similar to what you see in traditionally animated Ghibli and Disney movies, where the characters are outlined to stand out on watercolor-painted backgrounds. You can also see the same technique used in more recent animated films from Pixar, where the characters are hyper-stylized, and the environments are very realistic to make things pop. This direction enables us to design more distinct characters for better readability without compromising the atmosphere-heavy and richly detailed world.

Battlerite had a cartoonish look and feel to it. If the characters in V Rising are stylized, will it be in line with Battlerite? (Credit to Jambi on Discord for the question).

Our characters are stylized, much like Battlerite, but the art direction is different, and the animations are more natural to make them more believable. We don’t want them to look too exaggerated or goofy, and they need to resonate with the more realistic world. Battlerite has a very vibrant art style, full of colors where the characters are the main focus. All the champions were designed to be exceptional with larger-than-life personalities, while the arena worked as a backdrop. In V Rising, the world is more critical to the experience and takes up more of the visual bandwidth. Vampires, humans, and creatures are connected to the world, and the lighting works the same on both backgrounds and characters. We are toning down on what might otherwise be considered too “cartoon looking” by taking a more serious approach to design, movement, sounds, and materials. We have always been passionate about creating stylized games at Stunlock, and we want to stick to that even though V Rising’s requirements and direction are different from our previous games. 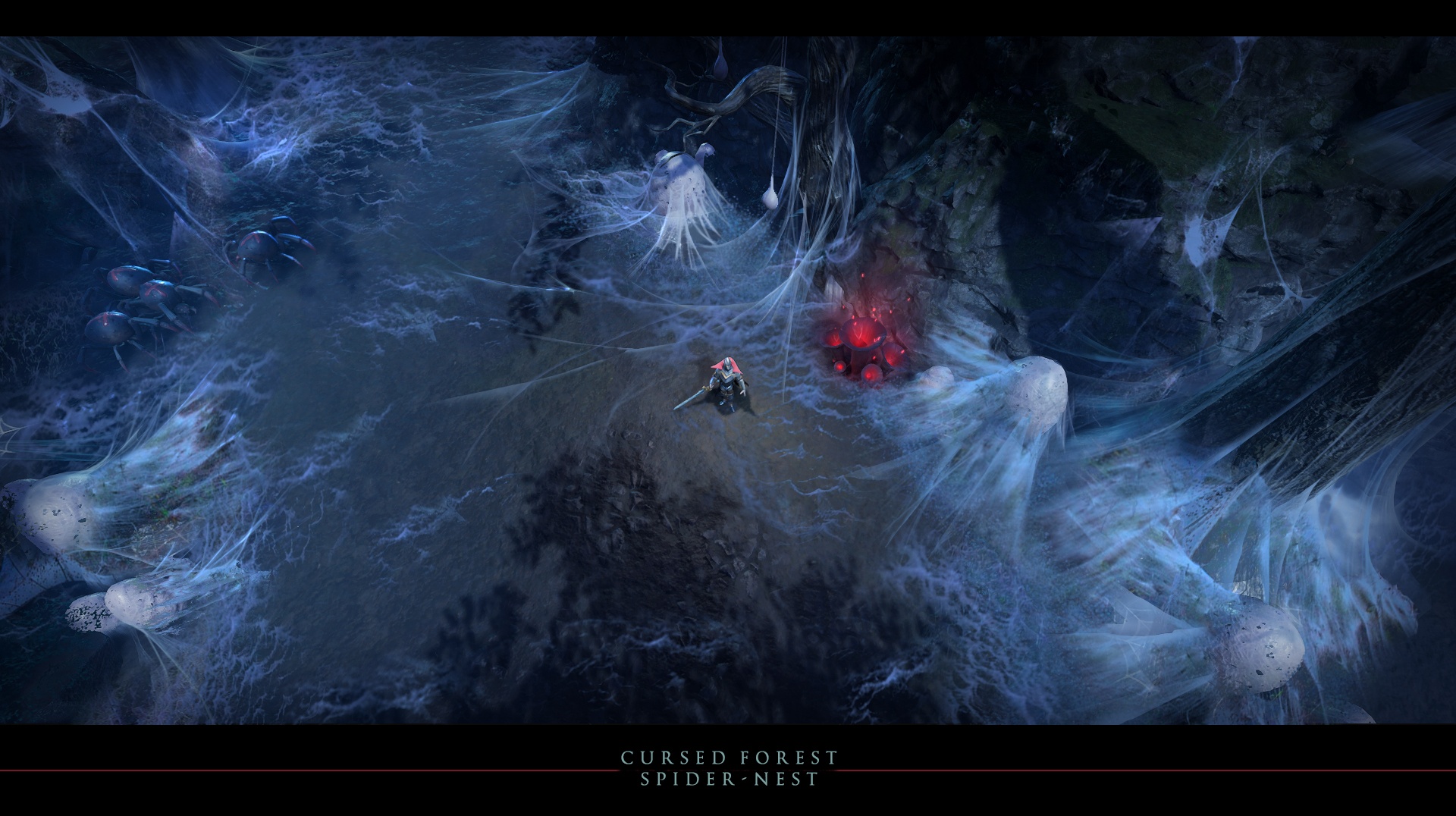 Concept of a spider nest in the Cursed Forest.

The game takes some inspiration from gothic horror. What does the word “gothic” mean to the team when creating the world of V Rising?

“Gothic” is an important keyword for several world elements, primarily dealing with everything vampire-themed. When it comes to castles, we work with architecture and details inspired by the gothic period (western Europe in the 12th–16th centuries). Sculptures, panel paintings, stained glass, frescoes, and illuminated manuscripts, among others, were all common at this time. We’re using vertical lines and more elongated shapes for the environmental design, which works well with the gothic theme. We also look at all the wonder and mystery, dark and picturesque scenery you can find in Gothic fiction. The Cursed Forest is an area in the game that is all about gothic horror and is made to be haunting even for a vampire. Humans are the more significant population, while supernatural and macabre creatures make the world more diverse and exciting. The gothic aesthetic and influences are present throughout the game. 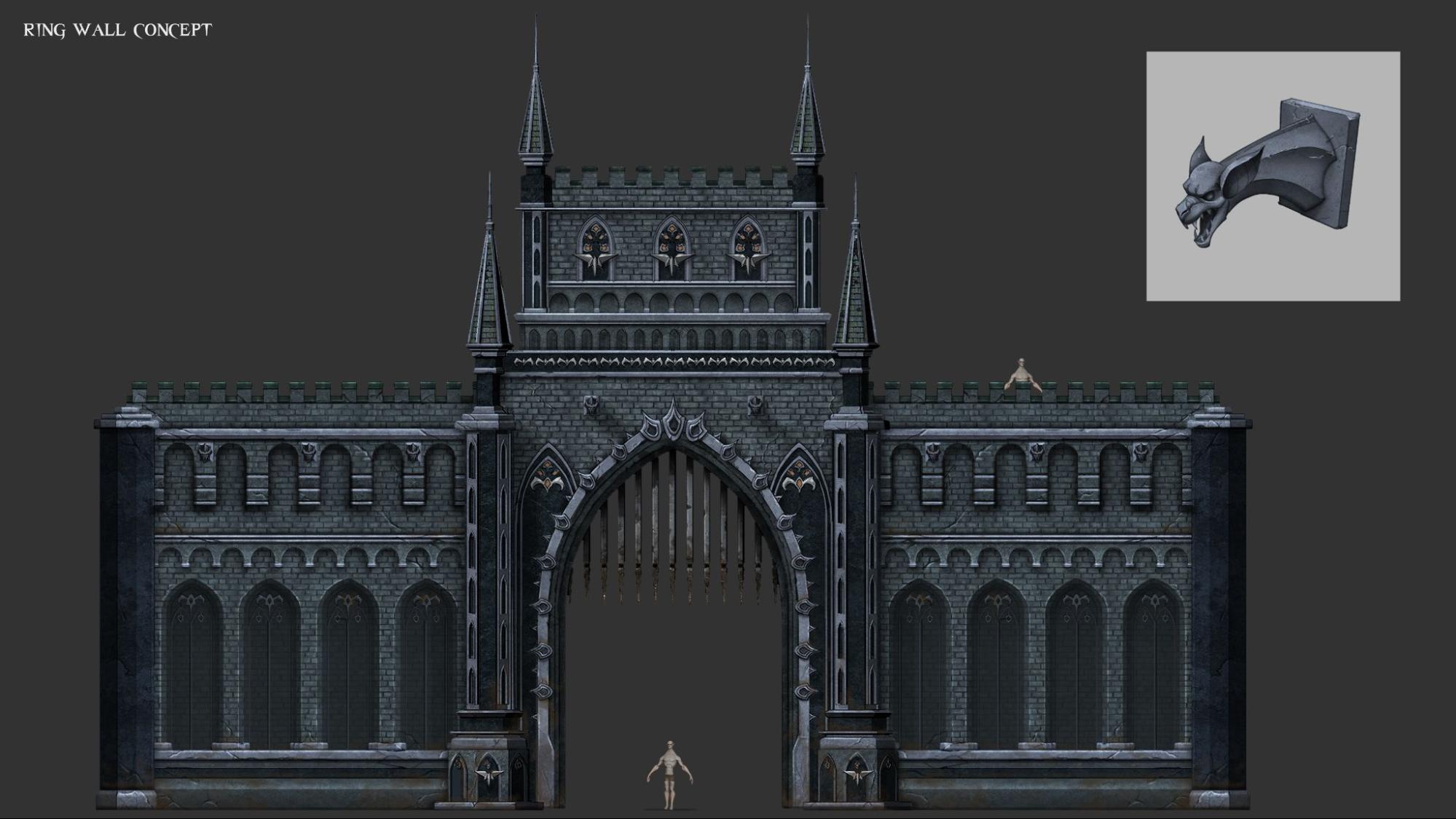 Let’s talk about what we are all waiting for – Vampires! What was the process and thinking behind creating the vampires? And what kind of feelings do you wish to communicate to the players, being a vampire?

The oldest and strongest emotion of mankind is fear, and in V Rising, you become the ultimate terror. We want you to feel powerful, but we also want to turn the tables from time to time to amplify the survival aspect of the game. The humans arm up for war, and your first encounter with a vampire hunter might end up with you doing your best to flee. Suddenly the hunter becomes the hunted. When we designed the vampire, we had a couple of key points to achieve. First of all, it needs to look like a vampire and not a “standard” human while still keeping the character human-like. This was harder than it would seem due to our in-game perspective and the character scale. To fulfill the vampiric power fantasy, we want the character to be strong, agile, and aggressive but simultaneously fulfill the survival aspects of being exposed and, at times, weak compared to the world and its inhabitants.

The approach we took was creating a strong contrast between the vampire in relation to the rest of the world. We want you to spot another vampire on the screen quickly, so we flipped the character silhouette design direction to make the vampire stand out compared to other units. The flipped silhouette creates a more idealized look that we accentuated further by keeping the details sleek and streamlined. The vampire has gone through quite a few iterations over the development of V Rising, and I now believe we have found a good spot where we can fulfill the vampire fantasy.

The Vampire! And a concept of a gothic-looking fence.

What’s been the most challenging aspect of developing V Rising in your role as an Art Director?

People have, in general, very different interpretations of vampires and what the theme means to them. What elements do you need to include to fulfill the fantasy in a survival game where you are the apex predator? Do all players want to live in a moody dark vampire castle in a mist-covered landscape? And how do we keep the gothic vibe if the vampire wants to live in a beautiful flowery meadow? Finding the right balance between the theme, Stunlock’s signature combat while giving the players as much freedom as possible has been a true challenge, but it also led to fascinating results.

Sofa on Discord asks: If you were to describe the art direction in three words, what would they be?

Xanoth on Discord asks: Will I be able to decorate my castle with paintings?

GhostyPie on Discord asks: In regards to the mood, will we have different soundtracks for the day and night cycle? Will we get samples anytime soon?

There will be different music for the various regions, and every region will have both day and night music to give you the right vibe when exploring the world. You will be able to listen to a sneak peek in a dev blog covering the music later this year.

Pepis on Discord asks: How much gore can we expect from the game? Will it also be similar to Diablo in that regard?

V Rising is a dark and brutal game with a lot of blood and other, none too savory behaviors. I don’t know if we’re quite at the level of Diablo, but it’s bloody. These are vampires, after all. That said, much like Netflix’s Castlevania show, there is a lot of magic and beauty to the world. It’s not all grimdark.

Greedlord on Discord asks: What do the color palettes for animations and special effects look like? How are weapons and spell kits meant to stand out?

Abilities native to vampires, such as biting and sucking blood, have a black and red color scheme with elements influenced by night creatures, such as bats, etc. Every weapon and spell kit has a unique direction and theme. A sword is sharp and fluid, a mace heavy and grounded, while manipulating chaos is, well, chaotic. Readability is still a large part of our design philosophy, and we want to make sure that the players can distinguish different weapons and spells from each other. At the same time, abilities shared by all vampire kin may have more substantial similarities to one another. 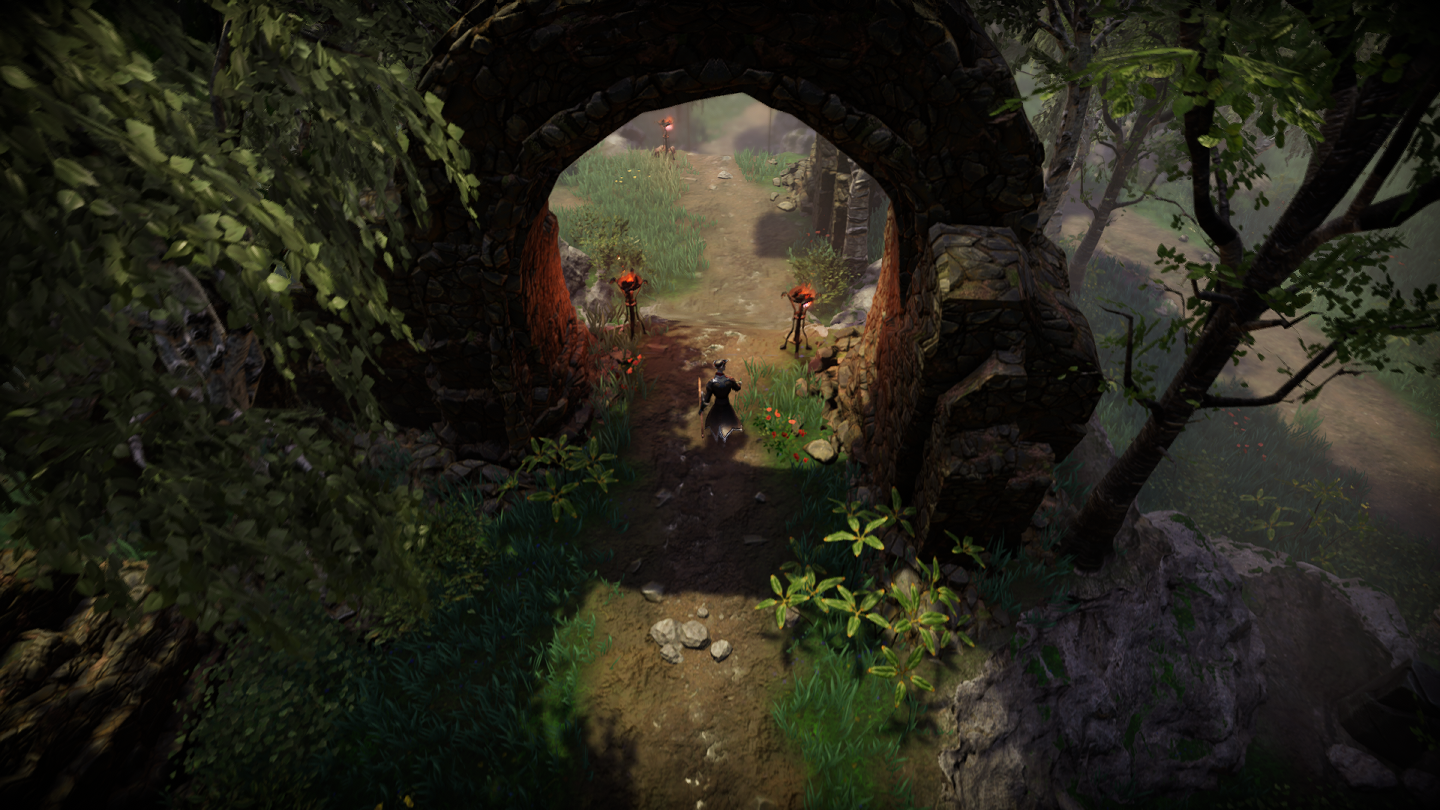 The colorful landscapes of Dunley Farmlands.

What’s been your biggest source of inspiration as an Art Director for V Rising?

Mike Mignola’s work has been a significant inspiration for the character design. He is a brilliant artist, most famous for his work on the Hellboy comic, which has a world with many similarities to V Rising. Much like Mignola does, I create simple, fantastical designs with a firm base in reality and history. Another reference is the Japanese artist Satoshi Matsuura who’s got a similar style to Mignola’s art but has a more stylized edge. Dark Souls and Darksiders are two of the many games we have been inspired by. I do think Stunlock Studios got a style of its own, and it will be evident in V Rising. When not strictly speaking about style, we also found inspiration in; Castlevania, the Anne Rice vampire trilogy, Vampire Hunter D, Blood the Last Vampire, Hellsing, Underworld, Blade, Buffy the Vampire Slayer, and more. With V Rising, we’re creating our interpretation of the theme with unique lore, while glancing at all the cool references out there.

Talking about lore. When can we learn more about that?

While V Rising is not a story-driven game, lore is still very important for us developers when working with the world. I will look into sharing more of the backstory in some of the upcoming dev updates.

Final question, can you share something about what you’re currently working on? Maybe some cool concept?

We are hard at work trying to nail the mood for the introduction part of the game. Here is a concept of the murky catacomb gate. Within this gate, you have been in a deep sleep for more than 800 years. It’s soon time to wake up! 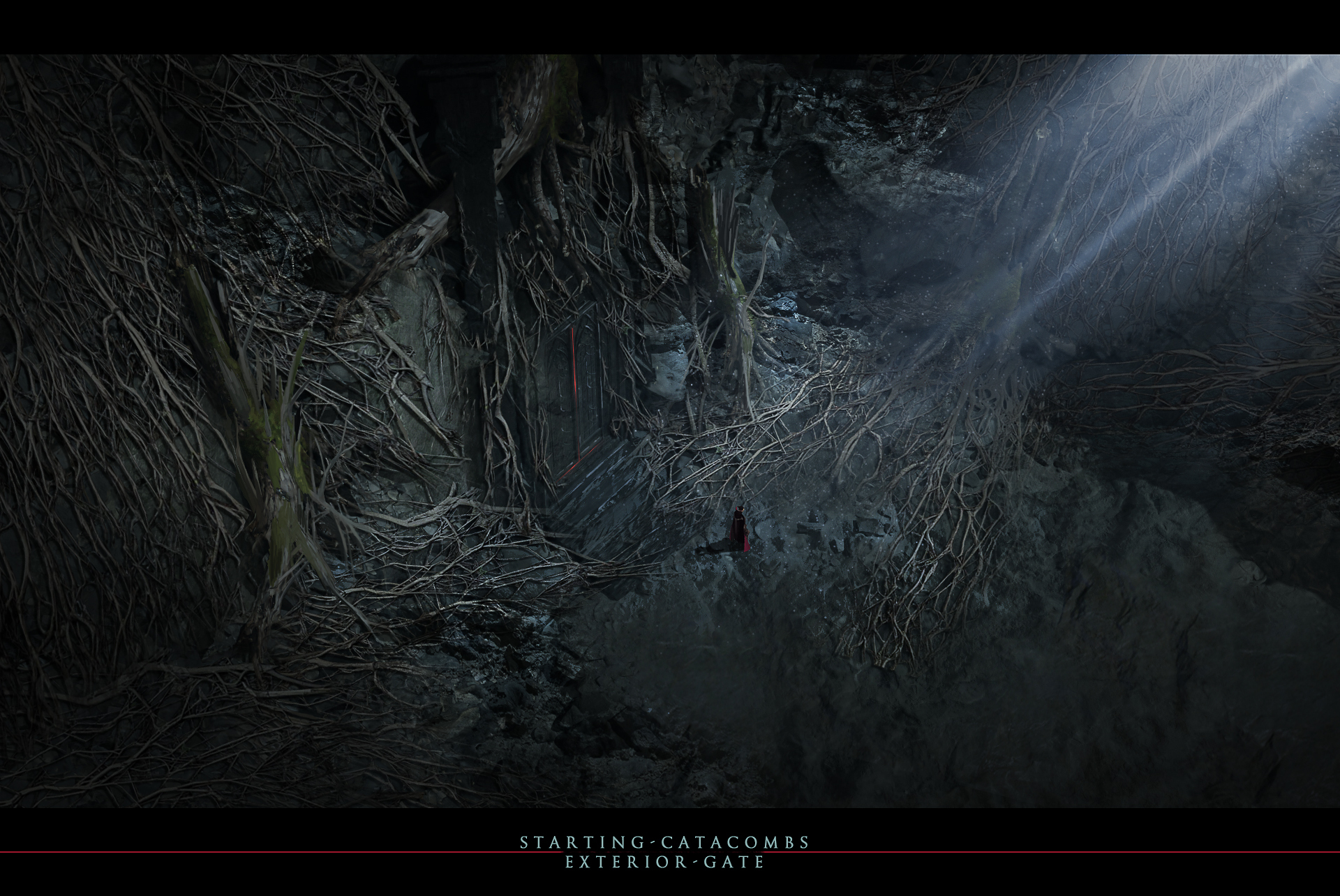 Thank you, Johan! We appreciate you taking your time to answer the community questions and sharing your work with us. We will keep reporting as the world of V Rising is continuously growing. Please keep in mind that there is still a long road to launch, and the information flow might be slower during the summertime while we start to prepare the long-awaited gameplay trailer. In the meantime, check out the following:

Lots of love and a Pint of Blood,